Global Economy Risks 2020: What Are We Sleeping On? 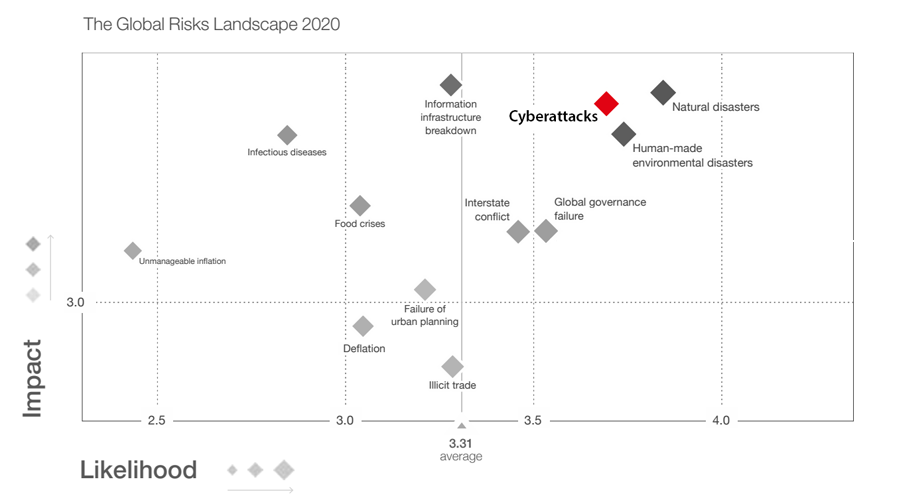 The World Economic Forum in Davos takes place this week, and while most of us won’t participate, we can and should discuss the information unveiled in the “The Global Risks Report Survey 2020”.

The 102-page report focuses on environmental, economic, societal, geopolitical, and technological risks. The survey of 800 business, government, non-profit organization leaders resulted in a global landscape “coordinate system” graphic, built on the impact and likelihood of risks.

Respondents contributing to the survey comprise of multistakeholder and shapers - young people driving change through dialogue and actions.

Unsurprisingly, the views of these often conflicting parties vary significantly.

No surprises there, environmental hazards deservedly claim the most concern on average.

Environmental risks comprise the top five risks by likelihood, also passing weapons of mass destruction in the “impact” department. Australia bushfires, Japan floods, and The Camp Fire disaster in Northern California are highlighted, rounded up by the number of economic losses from natural catastrophes - 165 billion dollars in 2018.

Report covers the main area of concern extensively, and provides enough information about other categories, including technological risks. I’m interested in them for both professional and personal reasons. The summary of that section will now be enhanced by bullet points:

While two camps look at the cybercrime problem from different perspectives, it’s reassuring that at least people are not ignoring the issue.

We live in a world where technology is extending into our physical world, and can aggravate the matters of the biggest concern. Whether we talk about geopolitical risks stemming from cybercrime or their contribution to economic woes - cyber incidents impose a large risk to our ever-transforming world. Technological risks are intervened with other subjects discussed in the report.

And just like climate change, cybercrime issues have the potential to affect us all.

There Are Still “Hoax” Accusations Directed At People Who Care

While the parties interested in changes for the better are pretty vocal, there would always be parts of our society that would dispute the reality of the threat.

As the saying goes, “some wouldn't know the truth if it hit them in the face”. The phrase rings true in more ways than one, as cyberattacks and data breaches that go unnoticed for months.

Investment in cybersecurity is not something most boards are “on board for”, refuting changes in a fashion similar to that of Australian Prime Minister Scott Morrison or Donald Trump when it comes to the problem of rising oceans.

“When needed, probably won’t work anyway” and “mops and buckets” mentality is a huge block to mitigating the risk of cyberattacks. But! Cybersecurity is not about solving the issue entirely, it’s about ensuring you have a protective layer that would make attacks pointless ROI-wise, or at least decrease the severity of aftereffects.

Cyberattacks could catch you between the rock and a hard place without any indication of happening prior. There’s no telling signs that would identify for your company being “next”.

Predicting cyberattacks can be tougher than dealing with them, and there’s no “safety threshold” put in place yet, no global governance framework for technology risks fragmenting cyberspace too.

Is The Ball In Our Court?

I can’t help but think about the popular “Everything is Fine” picture, when reality states the opposite.

I would like to borrow a line from the article that ignited this blog post, and reassure you that although the ball is in our court, a “clock shot violation” is still a thing. Time is ticking.

It would be nice to keep a distance from the land of extremities for once, but in a world where bushfires can be followed by fist-sized hail and radio silence can be interrupted by emergency alarms, you have to speak out and give attention to issues that are not pleasant to the ear.

As a business owner, I can understand why making a big step forward would be hard, but at least we could start from looking in the right direction.